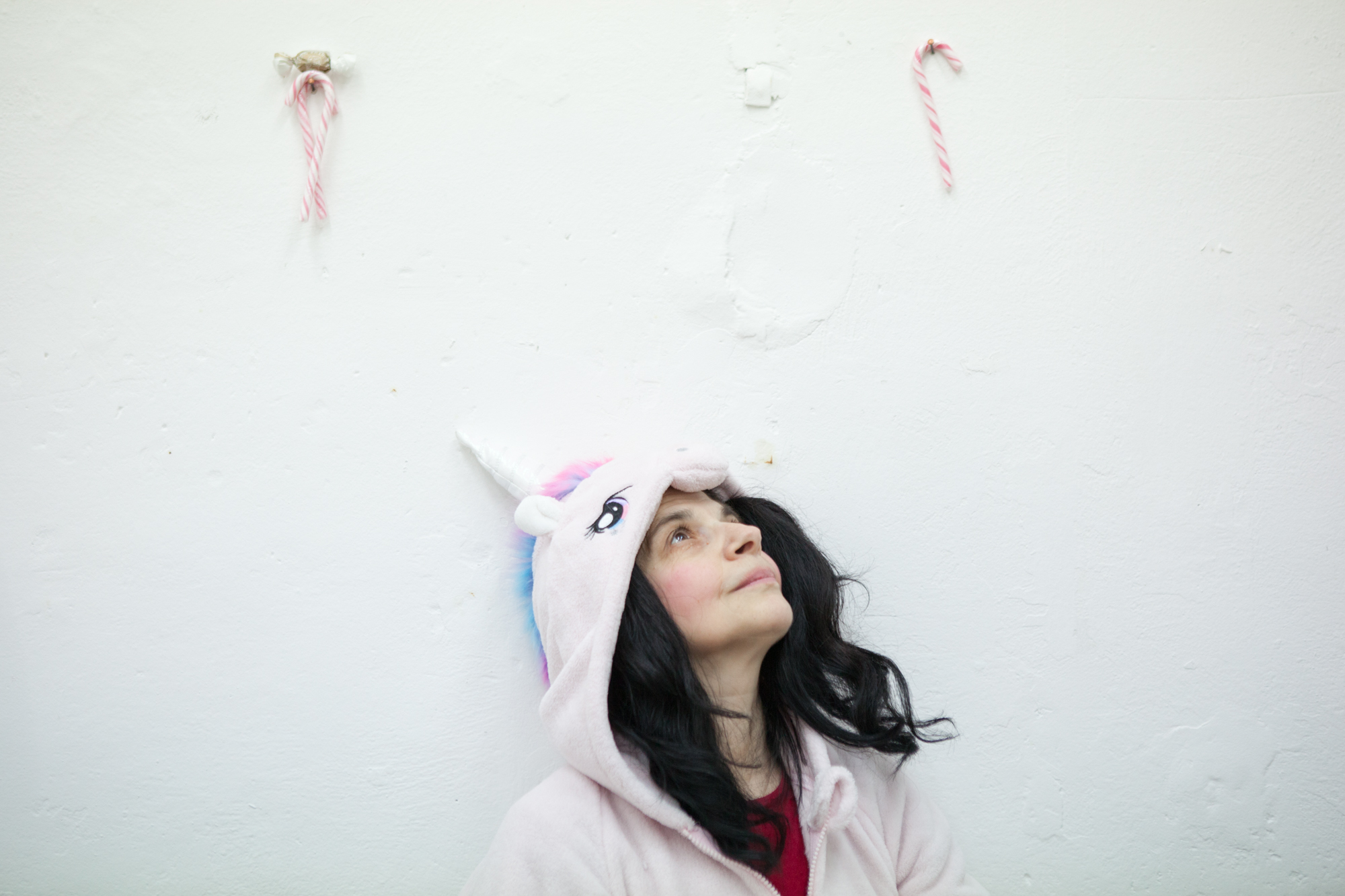 a project by
Irene Pittatore and Virginia Ruth Cerqua
in cooperation with
Casa Sidoli, a support service for adult women offered by the City of Turin and managed by Cooperativa Animazione Valdocco
produced by
Cooperativa Animazione Valdocco
as part of the activities for the fortieth anniversary of the foundation
with the general coordination of
Beppe Quaglia
curated by
Lisa Parola
music by
Davide Compagnoni (aka Khompa) and Davide Tomat

homeless heroines is an artistic project that is the result of a two-year journey conceived to create spaces for narration and representation for homeless women.
With their own strength, twelve women overcome adverse life circumstances on the street or in shelters.
These narratives have brought to life unprecedented figures: heroines, saints and vulnerable, tenacious warriors who point to horizons of redemption, imagination and emancipation.
Visit the website of the project: homelessheroines.it

Artworks
The relationship between the artists and the women involved is a sort of “travel diary” carried out with the use of different tools such as photography, speech and video, aiming to raise questions about other ways of living and about the transformations that these lives undergo.
The works were premiered at the MACRO Asilo – Museum of Contemporary Art in Rome (October 2019) and at CAMERA – Italian Centre for Photography in Turin (December 2019).

h2_homeless heroines, 2019
a photographic series, a collection of poetic texts and twelve video stories
h2_homeless heroines originates from the autobiographical stories of twelve homeless women and develops into an imaginative crescendo that leads to the constitution of as many heroic, unprecedented and necessary figures. A transition that develops from the identification of talents to their transfiguration and enhancement, in biographical video stories, to the fulfillment of the heroine portrayed in the exercise of her knowledge and powers, in the photographic series and poetic texts. Starting from the h2_homeless heroines works, the 2020 edition of the Cooperativa Animazione Valdocco Calendar was created.

h3_holy homeless heroines, 2019
a limited edition of 12 “sacred images”, 140 copies printed by Officina d’arte Torre
h3_holy homeless heroines gives an additional meaning to the original experience of transition from woman to heroine: protecting, supporting and encouraging those who need it through the reference to the iconography of religious saints. This work summarizes the biographical data and the mission of which each heroine is the bearer, through twelve sacred images and as many invocations, in which to recognize oneself, and to be inspired by.

The day I became a heroine, 2019
HD Video – 5’ 47’’
The day I became a heroine is a video in which the images of the transition from woman to heroine, the autobiographical experiences and the song Collide, composed by Davide Compagnoni (aka Khompa) and Davide Tomat, converse in a pulsation, a movement, almost a hypnotic trance that induces those who watch to participate in the rite of transformation, in which each woman draws on deep forces and resources.

Workshops
hero/ines _ heroes and heroines of everyday life is a workshop by Irene Pittatore and Virginia Ruth Cerqua that fosters contact with one’s own skills promoting their imaginative enhancement, and opening spaces for storytelling and intense confrontation for participants. The workshop stems from the artistic project homeless heroines.
The workshop hero/ines _ heroes and heroines of everyday life starts from sharing an experience in which each participant believes that he/she has overcome a difficult moment in life with his/her own strength: starting from the autobiographical portrait, the activity focuses on the creation of an new heroic character.
Each participant can experience the first transition from self to other, drawing on his/her skills and working on the empowerment of these skills, rediscovering how a personal resource can generate unexpected effects and beneficial functions for the professional and social context in which he/she operates.
The workshop aims to promote the identification and enhancement of each participant’s qualities, as personal and community resources, through sharing, imagination and creation of an unprecedented character. The method used facilitates teamwork and collaboration, in an environment of listening and welcoming, without judgment.
CADIAI – Cooperativa sociale, Bologna – IT
MACRO Asilo – Museo d’Arte Contemporanea, Roma – IT