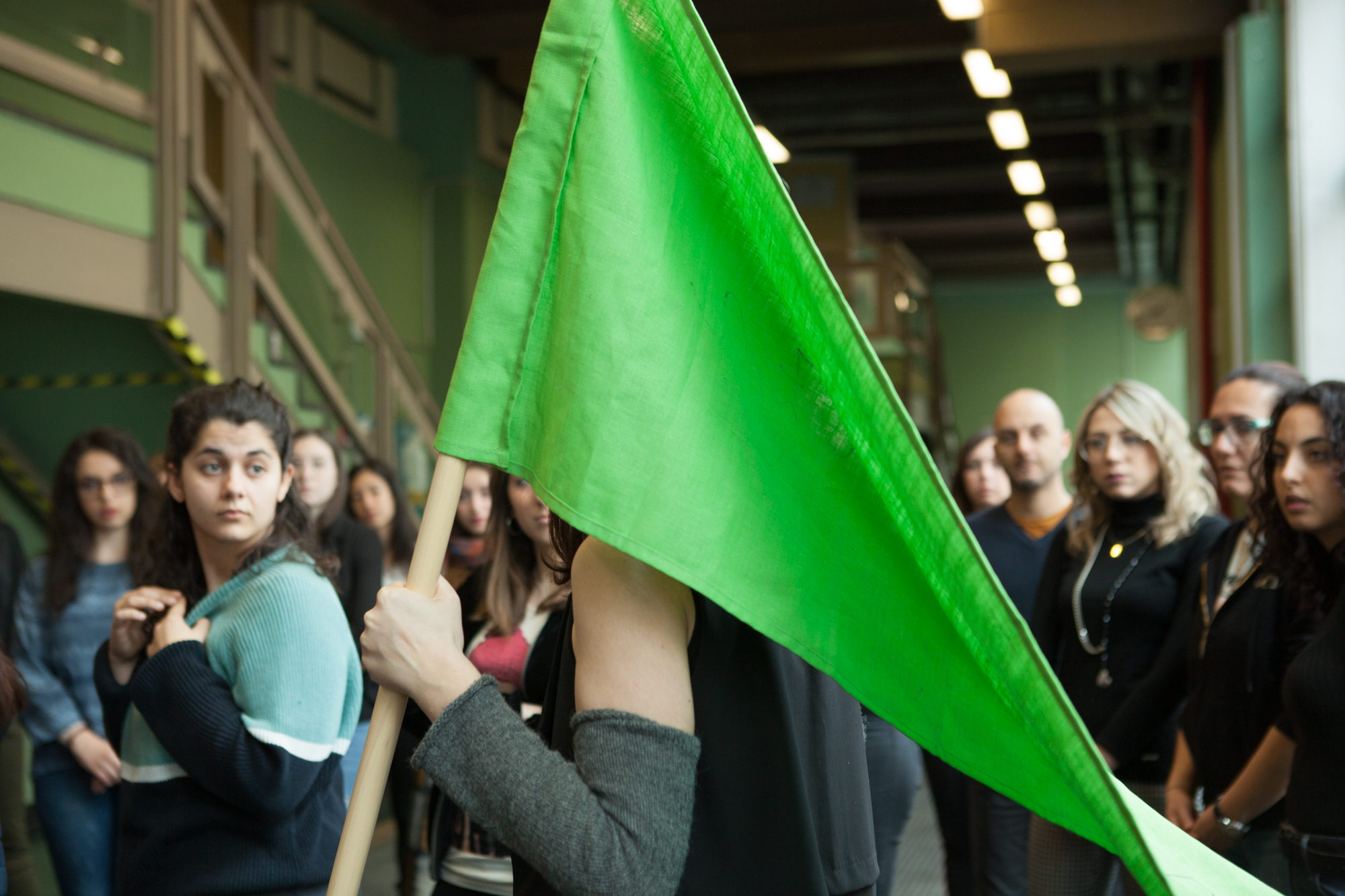 YOU AS ME _ Flag is a participatory art project based on performance and photography that focuses on an universal fabric of identification and signalization, the flag, reﬂecting on its evocative power, on the need of belonging that it collects and on the revendications it is the object of. It is capable of involving and activating students, researchers, established working groups – as well as cross-sectional groups set up for the occasion – on the themes of inclusion and intercultural communication, starting from the sharing of personal/professional experiences and fabrics.
Visit the website of the project: www.youasme.it

THE workshops and performances
YOU AS ME _ Flag originates from YOU AS ME / In someone else’s shoes, a photographic series and workshop that explore the potential and vulnerability of bodies that escape the prescriptiveness of roles, gender categories and status through the exchange of clothes and accessories.
The clothes, from which the reflection originates, manifest and codify social roles, belonging, identity. YOU AS ME _ Flag focuses on another universal fabric of identification and signalization, the flag.
Made collectively during a narrative workshop, the flag is composed of heterogeneous elements that aim to express through the fabric (its history, its function, its origin) an idea of inclusion rather than
supremacy.
The long flag, symbol of an idea of welcome nourished by the personal experience of the participants, is then translated into the object of a performance open to the public. Once the usual position of the flag is inverted, and it is placed on the ground to form a walkway instead of being hoisted, the public is invited to step on it.

The audience’s walk is accompanied by the voices of the performers who, in a whisper, tell the story of their own metre of fabric. As in the experience dedicated to clothes, the intention is to propose
an exercise of proximity and listening, a composite gesture of welcome. The workshop and the performance can also be developed online.
The workshop can involve up to 70 people at the same time, live or online, and take place preferably over two 3-hour meetings, with a public restitution of the work.
The workshops, led by Irene Pittatore, can be held in several languages with an interpreter and,
depending on the objectives and the context of intervention, can include the co-conduction of a
trainer and coach specialized in diversity management, intercultural communication and international development (Isabelle Demangeat), a professional educator with experience in the field of addictions and disabilities (Lucia Cavallo), an anthropologist (Silvia Stefani) and two contemporary art curators specialized in community projects and public art (Nicoletta Daldanise and Lisa Parola).

The methodology of YOU AS ME _ Flag was designed by Irene Pittatore in 2018 on the occasion of the opening of ArtVerona, with the cultural partnership of Fondazione Fitzcarraldo, the cooperation of Nicoletta Daldanise and the participation of the students of the biennium Atelier Direction – Cultural Mediation of Art of the Academy of Fine Arts of Verona and the Department of Philosophy and
Educational Sciences of the University of Turin, coordinated by Elena Ciresola and Valentina
Porcellana.

The digital version of the project, YOU AS ME _ Flag [ online edition ] was developed by Irene Pittatore in 2020, on the occasion of the course for Intercultural Animators proposed by the Intercultural Centre of the City of Turin in collaboration with the association ASAI, coordinated by Silvia Stefani.